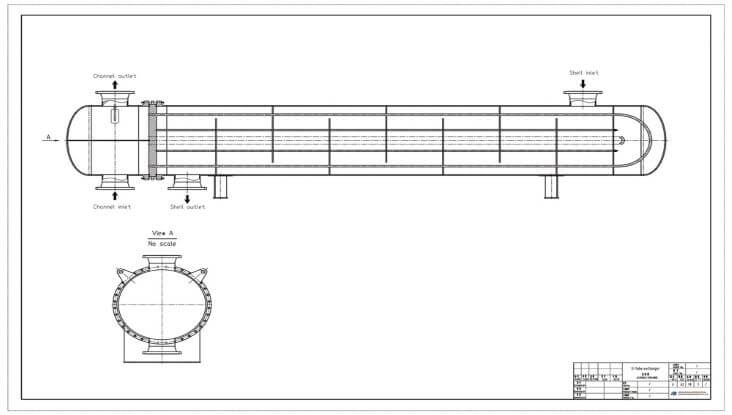 Heat exchanger is a device that transfers part of heat from hot fluid to cold fluid. It plays an important role in chemical, petroleum, power, food and many other industrial production. The heat exchanger produced by HC Petroleum Equipment are mainly used in petrochemical plants.

Floating head heat exchanger（As shown in Figure 1）: only one end of the tube plate at both ends is fixed with the housing, and the other end is free to move relative to the housing, which is called floating head. The floating head is composed of a floating tube plate, a hook ring and a floating head end cover, which is a detachable connection, and the tube bundle can be withdrawn from the casing. The tube bundle and the thermal deformation of the housing are not constrained from each other and thus do not generate thermal stress. It has the advantage of easy to clean between and inside pipes without thermal stress. However, the structure is complex, the cost is higher than that of fixed tube heat exchanger, the equipment is bulky with large material consumption, and the floating end cap can not be inspected in operation, so the sealing requirement is higher during manufacturing. It is suitable for occasions where the wall temperature difference between shell and tube bundle is large or the shell-side medium is easy to scale.

Fixed tube heat exchanger（As shown in Figure 2）: refers to shell-and-tube heat exchanger in which the tube at both ends of the bundle are fixedly connected to the shell by welding. The tube plate can also serve as a flange after being welded to the housing, and is bolted to the tube flange. The advantage is that the structure is simple, and the required inner diameter of the casing is minimized under the condition of ensuring an equal heat transfer surface. The disadvantage is that when there is a huge temperature difference between the shell and the tube-pass medium, a large thermal stress will be generated, which will lead to the leakage or instability of the tube due to the pull-off and rupture of the joint among tubes. At the same time, it is not convenient to maintain and clean the shell side. It is widely used in general occasions, but also limited by temperature difference.

U-tube heat exchanger（As shown in Figure 3）: a shell-and-tube heat exchanger in which the tube bundle is composed of U-shaped tubes of different radius of elbow, and both ends of the tube are fixed on the same tube. Since each U-shaped tube is free to expand and contract, there will be no temperature difference stress between the tube bundle and housing. Baffles and longitudinal partitions are arranged in the shell. The baffle plate is fixed by a tie rod. Longitudinal baffle is a rectangular plate, which is mounted parallel to the direction of heat transfer tube to increase the velocity of medium flow of the shell. Its structure is more complex than fixed tube heat exchanger and simpler than floating head heat exchanger.

Heat exchanger produced by HC Petroleum Equipment, the steam heat exchanger, is mainly used to increase the temperature of the well effluent to prevent hydrate formation, reduce viscosity, and decompose emulsion to effectively separate oil, gas and water, and directly provide enough heat from the steam generator. By using this way, heat exchange there will be more efficient and it is able to eliminate potential fire risk.