In case the processed gas flow is so insignificant that it is ignored, the separator is used for two liquid phases separating and it is called liquid/liquid separator. It surely is two-phase separator but the design and structure are basically the same with Three-phase separator, only gas outlet is canceled or combined with light-phase outlet. 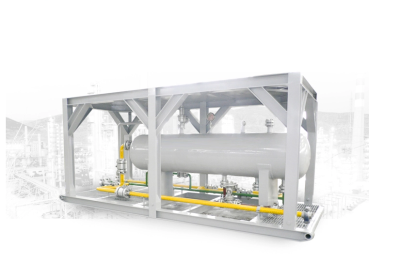 Two-phase separator is also called gas-liquid separator. As its name suggests, it is used for separating gas and liquid in wet gas stream, or more generally the gas/liquid stream, when the complex liquid phase components are not required to be separated from each other. Since the stream conditions and required efficiency may vary widely, the Two-phase separator can be designed in many models and with different performances. For instance, a gas/liquid separator upstream of a gas compressor would need to be very efficient, whereas in other cases only bulk separation of the gas and liquid phases is required.

Sometimes the key structure or component may also be indicated on separator names, such as vane pack separator and coalesce separator.

Two-phase separator is also often called knockout drum, KO Drum in short. The “knockout” suggests the free liquid droplets “knocked out” from continuous phase which carry them. For example, a low-pressure free-water KO Drum is so called because it`s designed to separate the free water from wet gas.

Vertical KO Drum is often used for bulk separation of gas and liquid. It has very low pressure drop and takes relatively small ground area to install. It is insensitive to fouling and foaming service.

It is often used to handle fluid with high gas/liquid flow ratio.

For Horizontal KO Drum, mist extractor is often necessary. If the mist extractor (also called as demister mat, mist trap, condensate trap, etc.) is equipped and considered important enough in the KO drum, it will also be called a Demister or Demister Drum.